These next two weeks, from 7-16 July, the UN’s High Level Political Forum (HLPF) 2020 will be held online. Several countries will present their Voluntary National Reports (VNRs) and civil society is active in releasing parallel reports, including by GCAP National Coalitions.

GCAP and our partners have organized a number of side events during the HLPF 2020. Due to the pandemic, all the events will be held virtually, the benefit of which is that they are accessible to many more people. They are an opportunity to promote our calls and to strengthen our actions.  We invite you and your colleagues to attend as many as you can! 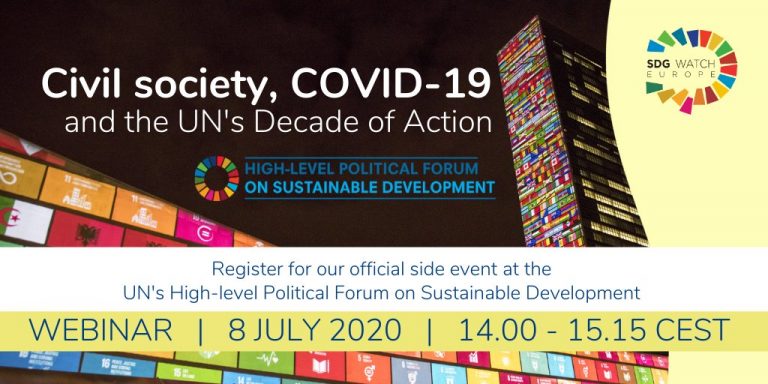 2020 has already been an extraordinary and tough year. The COVID-19 pandemic has severely impacted the world already burdened by deep inequalities. In this exceptional time, we are continuing our work for justice of putting the most vulnerable first.

We’ve already raised our voices advocating for robust public health systems, dramatically increased public expenditures for treatments and hospitals, and also for internationally coordinated public scientific research. We’ve strongly called for economic measures that provide governments with enough liquidity to finance needed economic measures. That’s why we’ve shared the international call for debt cancellation and for creative instruments to make new resources available without producing new indebtment. The need for rapid daring economic policies is high. We need to boost the macroeconomic framework, but this has to be done putting the weakest group at the core of political initiatives. The highest price of the economic crisis produced by the COVID-19 crisis is paid by the millions of informal and precarious workers, who cannot benefit from social protections put in place by the richest countries.

We do not want to build back! We want to build better, to build in a new way: a way able to include everybody and to improve our impact on environment and climate. Our call to public decision-makers asks to use this opportunity to radically reshape political sets, orienting economic recovery toward truly sustainable perspectives.

But the impact of the COVID-19 pandemic is not only related to the economic framework. We do know that the lockdown, implemented by almost all the countries in the world, has hidden and in many cases still hide cases of harsh violence.  It happened and happens with women and children in the dark of their home, with no possibility to escape sexual and physical abuse. It happened and happens in too many outrageous cases of political violence, ‘justified’ by the need to lock and ‘protect’ people.

Violence is one of our main concerns. During these past months, structural violence and racism have also become more evident, especially through the disgusting killings of George Floyd and many other BIPOC in the United States.  At the beginning of the COVID crisis, GCAP published a statement against racism, especially against the discrimination of Africans in China as well as Asians globally due to the pandemic. Racism, discrimination against marginalized groups globally and violence are growing and permanent challenges. As GCAP we will fight them with all our strengths!

Moreover, it’s important to see the positive change and movements growing everywhere.  The concept and the campaign that Black Lives Matter has resonated globally and caused millions to stand up to racism.  On 22 May, we launched the Global Day of Solidarity co-organized by GCAP and a large coalition of civil society groups and networks.  Millions across the world are standing up for justice, human rights and dignity for all.  In these difficult times, we will continue to support solidarity actions, raise awareness and advocated for needed policy change. That’s why we ask you to stand together with us in the next UN HLPF that will evaluate the implementation of the Agenda 2030 and in front of G20 Ministers of Finance who will meet in late July.

On 18 July, the G20 Ministers of Finance will meet. Many GCAP National Coalitions are active in the advocacy action within the C20. To strengthen this action, we will participate in a wide mobilization online asking the Finance Ministers to implement the debt cancellation initiative and the economic demands raised by international civil society.

September
This September we are looking forward to the Global Week of Action and joining forces globally to push for structural change and an end to inequalities, especially though the Agenda 2030. Last September we organized the People’s Assembly, as the final event of the Global Week of Action 2019.  This year we won’t be able to gather in New York, but we are continuing to support civil society and marginalized voices from the local to global levels. The UN is also celebrating its 75th anniversary. While the pandemic has made it difficult to organize and come together as we would like, we will use the opportunity to raise our voices and each other in other ways.