STATEMENT ON GLOBAL WEEK OF ACTION ON JUSTICE AND DEBT CANCELLATION (October 10-17, 2022)

We stand in solidarity with the millions of people in countless countries who have taken to the streets  over recent months to demand an end to debt domination and the destructive policies of the International Monetary Fund (IMF), the World Bank and other global lenders. From 14-16 October, the  IMF and World Bank will again hold their annual meetings to advance their neoliberal policy reforms, a  typically wasted opportunity to take bolder actions in support of debt-burdened, climate-stricken  countries in the Global South. The IMF has consistently imposed these reforms amid debt crises rooted in  global inequalities and colonial legacies. The Covid-19 pandemic has highlighted and aggravated these  long-evolving failures of our public health, social and economic systems, requiring a deep rethink of the  practices and conditionalities of the IMF, which have frequently contributed to these failures. Almost  three years since the UN declared COVID-19 a pandemic, the world faces a troublesome outlook, more  deeply unjust, unequal and unsustainable than before.

The IMF and World Bank continue to largely operate by offering emergency loans instead of meaningful  debt cancellation and long overdue reparations for decades of policies that left people poorer and  replaced colonialism with economic imperialism. Undue corporate influence has led states to provide  massive corporate subsidies and bailouts with little oversight, and rollbacks of environmental  protections. The IMF recovery packages have only benefited wealthy corporations, including private  lenders, with no relief in sight for peoples weighed down by massive and illegitimate debts, lost jobs,  excruciating poverty, collapsing public health systems and intensifying climate events. All global regions,  particularly the Global South, have been pushed deeper in multiple crises. This is a resounding  indictment of the failed, flawed and futile responses to systemic problems and a clear call for peoples  worldwide to push ever more strongly for genuine transformative change.

The ongoing COVID-19 pandemic continues to cost millions of lives and livelihoods especially among  those without public support and access to vaccines. Its economic consequences also increased  inequality within and between countries. It led debt-dependent countries piling up more loans on top of  unsustainable and illegitimate debts accumulated from previous decades. IFIs, bilateral and private  lenders have largely contributed through reckless lending, pushing more loans and debt-creating  measures. The IMF increased their disbursements of new loans from $8.3billion in 2019 to $31.6 billion in  2020, while other multilateral institutions also increased their loans from $52.2billion to $70.6 billion.  Bilateral and private lending actually decreased from 2019 to 2020.

On top of these burdens, the IMF persists in levying millions of dollars of surcharges on countries to  which it has made large loans, often in disregard of its own statute and norms, including Argentina,  Ecuador, Egypt, Pakistan, and Ukraine, among many others.

In February this year, yet another crisis erupted out of profoundly unequal socio-economic, financial,  political and military systems and relations that fracture the world today. Russia’s invasion of Ukraine  dramatically worsened the humanitarian crisis worldwide. An estimated 71 million more people are  reported to have been pushed into extreme poverty in the wake of dire spillovers of soaring food and  energy prices worldwide.

With interest rates spiking, debt accumulation is rising to record-breaking heights. Several countries now  deemed to be on the brink of debt defaults, or at high risk of being so, are projected to follow Sri Lanka,  Zambia, Lebanon, Zimbabwe and Suriname. They include Argentina, Pakistan, Egypt, Kenya, Ghana and  Tunisia – most of which are middle-income countries – showing that all countries need access to debt  cancellation. Of the new loans to lower and middle-income countries as of 2020, five times as much debt  came from private lenders as compared to bilateral lenders. Private lenders were reported to hold  US$2.18 trillion or 63 per cent of the long-term external public debts claimed from them, including  US$1.73 trillion in the form of bonds.

This attests to the limitations of the G7/G20’s Debt Service Suspension Initiative (DSSI). It offered nothing  to middle-income countries and, because private and multilateral lenders did not take part, it led to less  than a quarter of debt payments being suspended for the countries which took part with no reduction in  their debt stock.

Upon the DSSI’s expiry in December 2021, participating countries such as Pakistan resumed debt service  payments to the governments which had suspended payments, but under even more difficult  circumstances, including bigger debts incurred in the last couple of years and higher interest rates that  could rise even more at a moment’s notice. No response has been forthcoming from the governments  and IFIs who simply continue to “urge” and “encourage” participation in the face of sheer impunity by  private lenders.

In November 2020, the G20 approved the Common Framework for debt treatments beyond DSSI, a  scheme to, in theory, facilitate debt restructuring for some low- and middle-income countries. In almost  two years only three countries, Zambia, Ethiopia and Chad, have applied to the Common Framework,  and not a single dollar of debt has been so far restructured or canceled yet. The recent news on the IMF  program approvals for Zambia show that debt restructuring or reduction will come at the expense of  austerity as well as even greater plunder and impunity for those responsible.

Austerity in its various forms, has pushed impoverished countries into deeper inequality and further  debt crises, following IFIs’ conditionality and the dominant neoliberal mindset. This prescription has not  changed despite conditions showing the heaviest impacts of austerity measures falling on the most  vulnerable and marginalized sectors. Up to 85 per cent of the 107 COVID-19 loans negotiated between  the IMF and 85 governments have been found to contain austerity plans to be implemented when the  health crisis lifts.

This also comes at a time of increasingly catastrophic climate events, which inflict the most destructive  impacts on those least responsible for the climate crisis, the peoples of the Global South. Behind World  Bank pronouncements that the Bank will stop financing upstream investments in oil and gas after 2019  are scores of coal, gas and oil projects that it funded and has yet to account for in contributing to climate

locked many countries in the Global South into dependency on the fossil fuel industry, and contributed  heavily to the escalation of the climate crisis. Since the 2015 Paris Agreement, the World Bank invested  over $12 billion in fossil fuels, $10.5 billion of which were new direct fossil fuel project finance. Billions  more flow to fossil fuels through mixed operations and indirect funding. Some $4 billion, or 35 per cent  of the World Bank Group’s fossil fuel assistance since 2015 went to eight G20 countries, several of which  provide the largest sources of public subsidies for fossil fuels.

We refuse to be held hostage by the lenders and global rule-makers who are leading us down a path  towards greater inequality, impoverishment, deprivation and ecocide. Urgently, we reiterate the calls we  as civil society laid out in 2020, demanding – 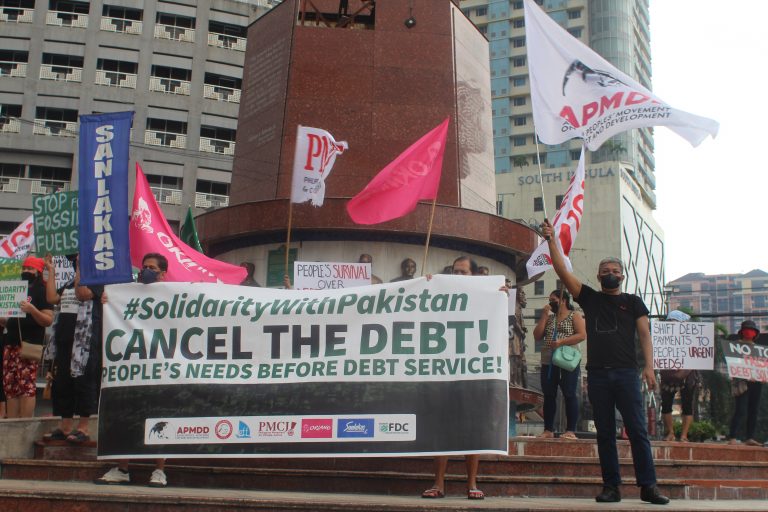