Solidarity Message for Global Week of Action for Debt Cancelation

The Global Call to Action Against Poverty (GCAP) expresses solidarity with hundreds of millions of people suffering under the COVID-19 pandemic. Communities worldwide are being pushed deeper into poverty, precarious existence and inequalities – with a massive loss of paid- and self-employment and livelihoods as well as exacerbating limitations to access to food, water and sanitation, adequate housing, education, health services and other basic needs. It is estimated that 500 million more people could be pushed into poverty as a result of the pandemic and the economic downturn that it has exceedingly exacerbated. In addition, in all regions of the world violence against women, girls and LGBTQIA+ people has escalated and in severity. For instance, during the lockdown in several countries, a worrisome number of young women and girls have fallen victims of unwanted pregnancies.

However, governments in many countries are unable to support their people due to debt payments. Over US$300 billion is being spent annually by the Global South for Public External Debt payments to bilateral and multilateral lenders such as the World Bank and IMF, private banks, speculators, and investors in government bonds and securities. The debt problem is compounded by illicit financial flows, also in the billions of dollars.

This is an untenable situation and is affecting millions of people across the world.

Therefore, during the Annual Meeting of World Bank and IMF and the G20 Finance Ministers Meeting, GCAP joins a broad global civil society movement calling for the unconditional cancelation of public external debts – at least for the next four years.

GCAP calls on all members to join the Global Week of Action for Debt Cancelation!

The Global Week of Action for Debt Cancellation is in full swing! It started last October 10 and will end on October 17.

Today October 14, an online rally took place, one of the highlights of this week is an Open Letter addressed to All Governments, International Institutions and Lenders. 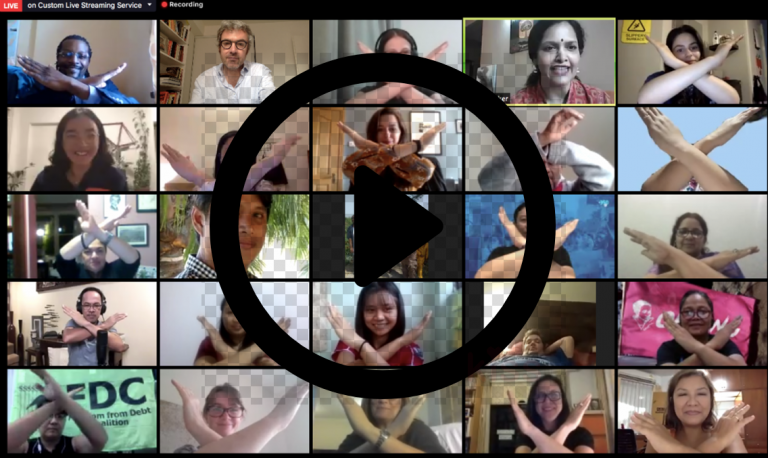 We are hoping to make a big impact through this letter – both in terms of the message of the letter as well as the breadth and number of signatories from among organizations, movements, citizens groups and public leaders.

This week the G20 Finance Ministers are meeting, and people all over the world are making sure their voices are heard. We hope to generate an impact for a re-invigorated, sustained global debt movement to rise to what will even be bigger challenges in the coming years. It’s important to send a strong demand from civil society for the IMF-World Bank Annual Meeting!

For more information about activities, webinars and other events beyond the GCAP National Coalitions and Constituency Groups please visit https://www.debtgwa.net/.