It was quite evident in the initial phases of the COVID-19 pandemic that it’s not just a health issue but also an issue of hunger and loss of livelihood due to the strict lockdowns. After 2 years of pandemic, it’s clearer that “hunger” is established to be a real time threat as much as or more than the threat from the virus and this is alarming for the most marginalized communities. A recent Oxfam report brings forth this. According to the OXFAM report, 20 million more people have been pushed to extreme levels of hunger in 2021 reaching a total of 155 million people. It also states countries and regions where the food crisis has taken a colossal scale due to the pandemic are Yemen, the Central African Republic, Afghanistan, Venezuela, the West African Sahel, Ethiopia, Sudan, South Sudan, Syria. Hunger hotspots were also seen in countries like Brazil, India and South Africa, where COVID-19 infections were extreme. 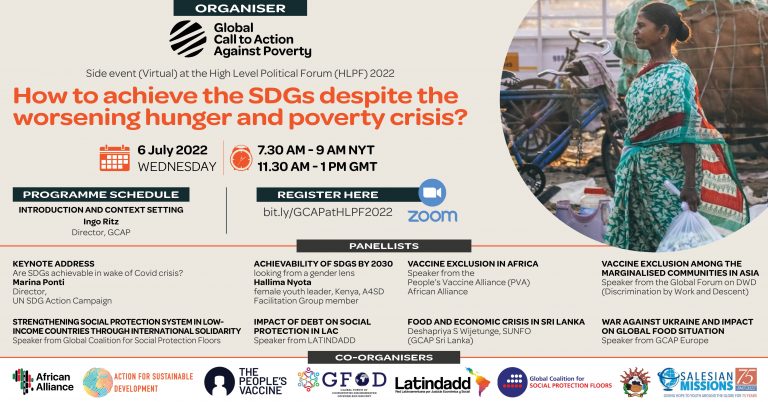 The world is facing a «human catastrophe» from a food crisis arising from Russia’s invasion of Ukraine. Ukraine is a major producer of cereals such as maize and wheat which have risen sharply in price due to the war affecting the supply to the rest of the world. The UN Food and Agricultural Organisation (FAO) warned last month that food prices could rise by up to 20% as a result of the conflict in Ukraine, raising the risk of increased malnutrition across the world.

The threat from the virus looms large in Africa (Barely 15% people are vaccinated), so also some low- and middle-income countries in other regions because of the TRIPS (Trade Related Intellectual Property Rights) restriction on the COVID-19 vaccines. The opposition from some rich countries to the TRIPS waiver proposal at the WTO has defeated global solidarity. This has a debilitating impact on people’s lives, food security and livelihood.

The side event will focus on the discussion on “Building forward better” around four interlinked themes – vaccines, hunger, debt and social protection, and livelihood while discussing it in context of the achievement of the SDGs, especially SDG 5 using the gender lens. This event will be considered as a part of the series of actions and discussions hosted by GCAP and the wider civil society coalitions in the build-up to the Global Week of Action (GWA) culminating in September 25, the day of adoption of the Agenda 2030. One flagship programme of GCAP is the People’s Assemblies – done during the Global Week of Action – at the national, regional and global levels with people from the marginalized groups coming together to discuss their issues and preparing a charter of demands for advocacy.