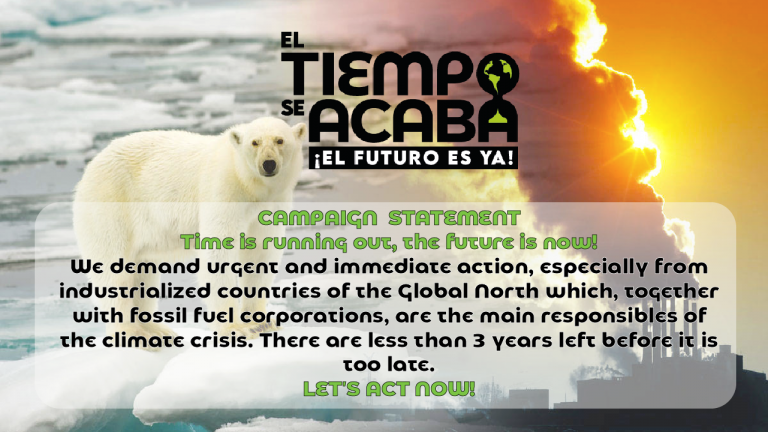 “Time is running out, the future is now!”

Humanity is at a very critical moment, resulting from a multidimensional crisis that puts people’s health and lives and ecosystems at risk. It has also deepened the enormous inequalities that already existed globally, having exacerbated socio-economic vulnerabilities and environmental issues, mainly to the detriment of historically discriminated groups in our countries, in the Global South: women in all their diversity, children, youth, indigenous peoples, Afro-descendants and local communities, people with disabilities, sexual diversity, small rural producers, migrants, lower income households, elderly adults, among others. Any decision will affect the sustainability of a dignified life, plus the economic, political, health and peace crises make action difficult.

Today’s emergency has historical roots anchored in the extractive processes on which welfare regimes were founded in today’s rich countries, added to an unfair and neo-colonial international financial system that will never respond to the needs of the Global South if it is not reformed. Highly unsustainable economic models such as capitalism, consumerism and extractivism have accumulated wealth for a few, surpassing the natural limits of the planet through the overexploitation of resources and the generation of high levels of pollution, which have led to environmental crises such as the climate crisis and the loss of biodiversity, which according to science, are already having irreversible effects, and if advancing at the current rate, could lead us to a point of no return, which could imply a sixth mass extinction, that is, the first caused by economic models.

The latest reports and estimates from the scientific community and the United Nations are alarming and pose a “red alert for humanity”, considering that there are less than 3 years left to opportunely stop the climate change crisis and reach a safe scenario for life, in accordance with one of the objectives set out within the Paris Agreement, to limit the increase in temperature to 1.5°C.

In other words, there is an urgent need to act immediately, putting a dignified life at the center of decisions and implementing real solutions that respond to the magnitude of the emergency and are built from a systemic approach to climate justice.

There is no time for distractions, given the imminent risk of the extinction in the planet, it is banal to pretend that the war between Russia and Ukraine is the number one priority , and that the economic resources of the most polluting countries are being allocated to that cause, to purchase weapons and to finance the fossil fuel industry, accelerating the climate change crisis instead of addressing it, once again weakening the climate agenda, as happened in 2020, putting at risk the fulfillment of the Paris Agreement and the necessary commitments to mobilize climate finance to countries that need it the most.

A few days before the beginning of one of the most important international negotiation instances on climate change, the COP27 in Egypt, we, the signatory organizations and networks, make an urgent call demanding that you, leaders and representatives of the delegations of countries of the Global North that will participate in this event, recognize that you are the main responsible for the historical climate debt with the planet, and therefore, that you should be the ones to make the greatest efforts:

Similarly, and recognizing that the countries of the Global South cannot remain on the sidelines since they are highly vulnerable to climate impacts, and that addressing the climate crisis must be a global effort, we demand the following to our representatives and leaders from Latin America and Caribbean:

History has placed you in a privileged position at a critical moment, where it takes courage to make the right decisions. We demand you to be co-responsible for our existence and not accomplices in this catastrophe. The financing and development policy decisions made TODAY will be decisive, we will not be able to go back.

As the name of our initiative mentions: “Time is running out, the future is now!”

Justice for the planet and the well-being of people! 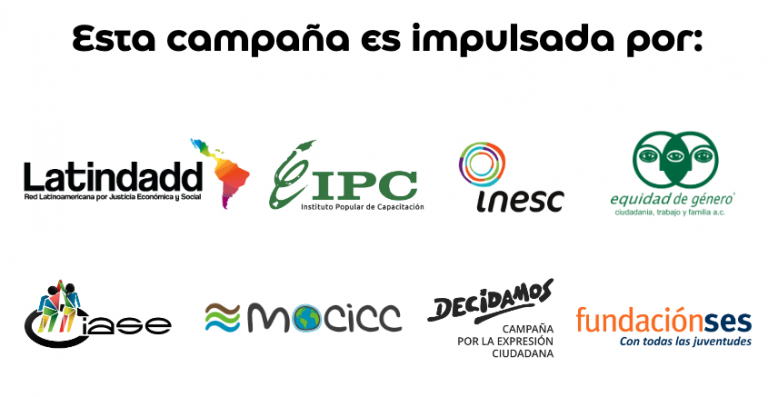