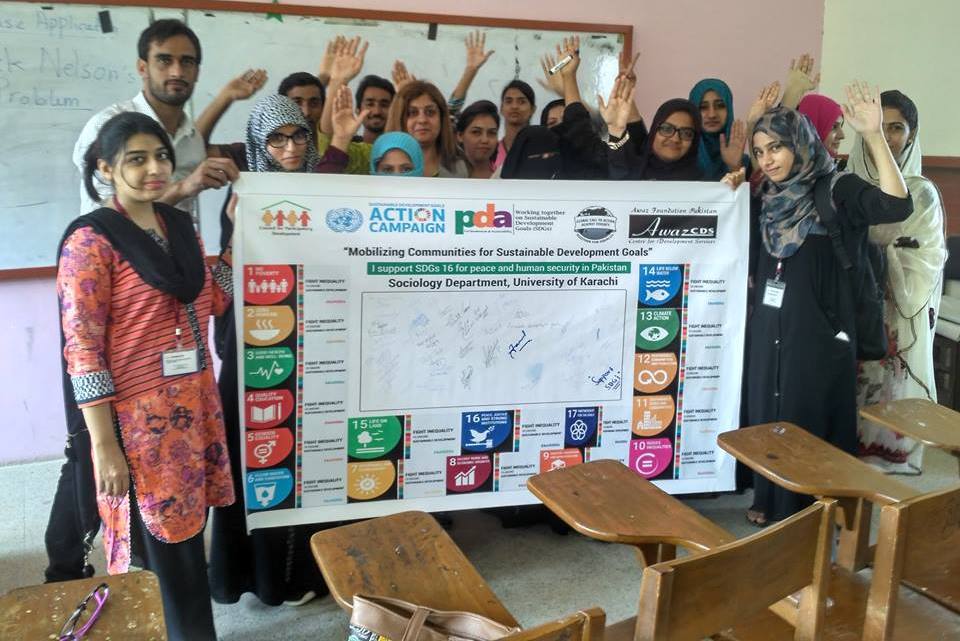 The campaigns like Stand Up and Take Action (SUTA), Keep Your Promises on Sanitation and MDGs (KYPS), Leave No One Behind (LNOB), From Policy to Action- Beyond 2015, Action 2015 and the post-2015 consultative processes in Pakistan were facilitated by AwazCDS-Pakistan as National Secretariat of GCAP in Pakistan since 2008.

GCAP Pakistan Development Alliance remained engaged in highlighting the inequalities in our society through MDGs leave non one behind campaign to post 2015 consultative processes. We have also decided to conduct the study on “Faces of Inequality” in Pakistan.

PDA is an alliance of organisations across the country, which are working together for the implementation of SDGs with a special focus on governance and accountability. SDGs 3, 4,5 10 and 16 are our priority goals to be followed up. This year PDA did gap assessment on SDGs implementation. We consulted Parliament task force members, chambers of commerce, media, planning commission department, UNDP, academia etc to know what’s happening on SDGs and to identify the roadblocks. We did it in all provinces. Goal 10 was covered. People suggested peace and eliminating inequality in Pak.

We undertook activities in the global day of action on September 25, 2017 and same time in 2018. We also undertook several actions and community level discussions in different districts during the Global Week of Action from September 20 – 27, 2019. Pakistan presented its VNR in 2019. We did a civil society report on Agenda 2030 titled “Citizens Voice on Voluntary National Reviews and status of SDGs in Pakistan.

PDA in the Media:

GCAP-Pakistan has been renamed as Pakistan Development Alliance since 2014. It has a base of 134 members. Some of them are: Lions Club, Society for Sustainable Development, Higher Education Mission, National Testing Services, Voluntary Services Overseas, Inter University Consortium for promotion of social sciences
We use cookies! By using this website without changing your settings, you consent to our use of cookies. Choose your preference or click “more” to personalise your settings.
ACCEPTREJECTMore ...
Manage consent