GCAP and partners organized a fruitful consultation on Global Partnership and Joint Actions in Addressing Discrimination based on Work & Descent, Untouchability, Contemporary forms of Slavery and Analogous Forms of Discrimination in Dakar, Senegal from 9-11 April.

38 representatives of the committed national and international NGOs and civil society organizations from Africa, Asia and Europe, activists, leaders of the communities discriminated based on work and descent, human rights defenders and special rapporteurs attended the consultation and made it a great success. Please see the agenda here. Many acknowledged that that the issue of discrimination such as DWD, untouchability and contemporary forms of slavery is very critical that we all need to pursue further. 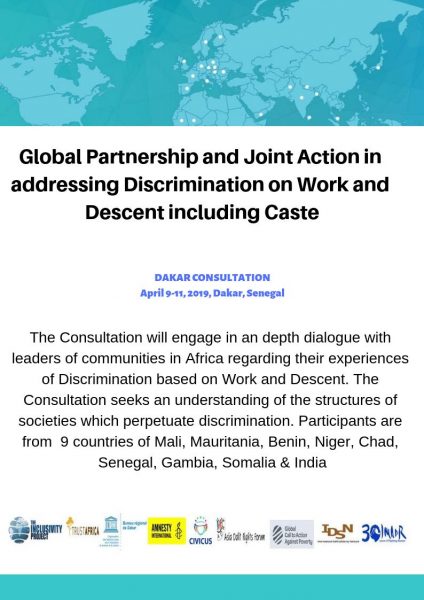 A major achievement of the consultation is the emergence of Africa Network Against Discrimination Based on Work & Descent and Contemporary forms of Slavery to take up the further actions in the region.

The consultation was covered by the African mainstream media: TV news in English and in French. A comprehensive report on the Dakar Consultation is being prepared as well as a short documentary.

Going forward, it is proposed to further initiate and strengthen a global network which would address the issues of DWD and slavery globally. The Dakar Consultation has further planned to call for a Global Assembly consisting of all the representatives of the DWD communities in Africa, Asia, Americas and Europe during the UN General Assembly review meet of SDGs between 20-24 September 2019.