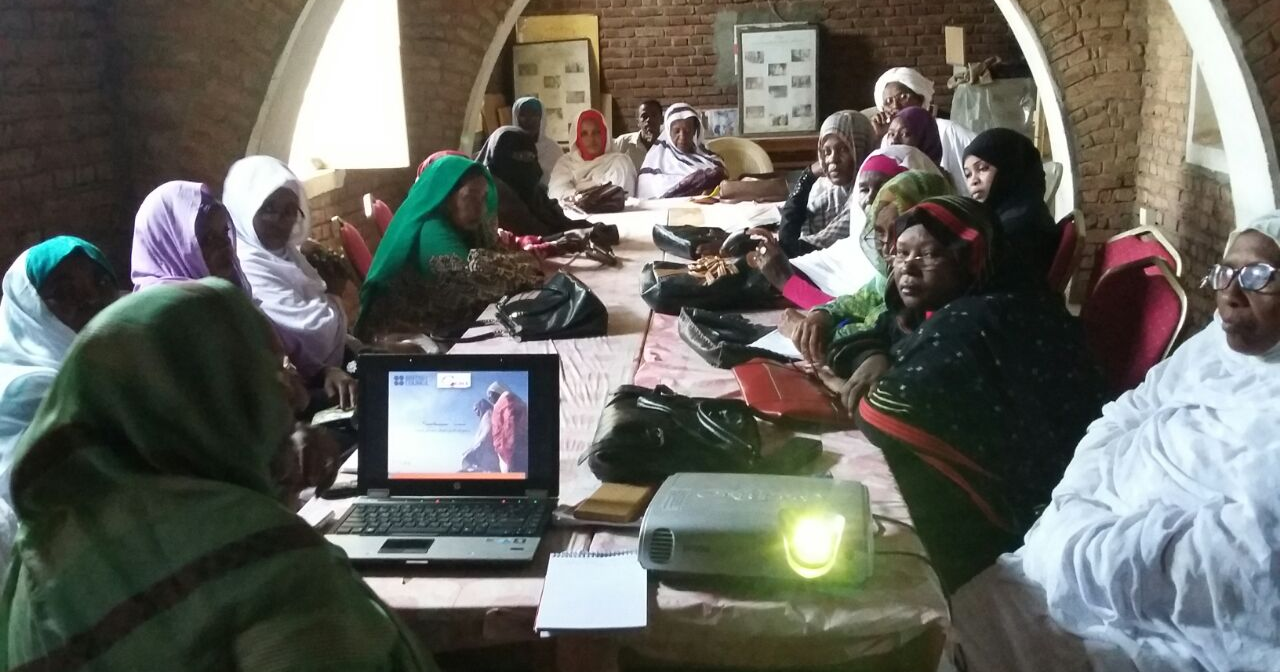 The Gender Centre for Research and Training (GCRT) is a Sudanese civil society organization based in Khartoum yet extending its activities to other states. The GCRT was established in 1997 with the aim of raising awareness on gender concepts to ensure gender mainstreaming in both contexts of development and government policies. The GCRT focuses on research, training, building alliances, networking, advocacy, and creating solidarity as means and methods to achieve its objectives.

The Gender Center for Research and Training envision itself has developed capacities to mainstream rights in thinking, policies, and programs and has initiated powerful alliances through viable innovative approaches.

As an active civil society member, the GCRT promotes women’s equality and the right of women to be active participants in social, cultural, economic, and political life in Sudan during a transitional period toward democracy and peace.

• Creation and dissemination of knowledge related to issues of development, rights and gender;
• Creation of strong alliances to help influence politics consolidating the emerging democratic experiences;
• Enhancement of rights-oriented movement to influence decisions and policies to protect interests of politically, economically and socially excluded people.
Values

• Transparency and full accountability
• Commitment and credibility.
• Equality and democracy

• In the year 1997, the Gender Center for Research and Training (The GCRT) was founded by pioneer women and activists, as a non-governmental, non-profit and non-political organization. The organization was established as the will of citizens to participate actively in advancement and protecting of women’s rights, as well as to take an active role in the civil society development advocating for gender equality.
• The GCRT is dedicated to the gender equality which, will strengthen sustainable development and lead towards social and economic improvements of the social communities at national level. In order to achieve this, the GCRT is committed to work with different range of stakeholders to foster cooperation and joint work for the purpose of achieving sustainable future.
• The GCRT contributes towards creating solidarity among women organizations through networking with active organizations, for instance the Sudanese Women Society Network for Peace, WILDAF, and the network for the elimination of FGM in Sudan (SUNAF) or the Human Rights and Legal Aid Network (HRLAN). The GCRT is founding member of the Sudanese Women Solidarity Network.
• In its life span the GCRT contributed and is contributing to different activities, initiatives, programs, and advocacy efforts among others. The organization witnessed development of its strategic plans along with the emerging and fluid political situation, the revisions of the 2=3 years strategy enabled the organization to be committed to its strategic vision as well accompany the changing political environment.
• Regardless the shrinkage of the margin of freedoms in the last five years, the Center succeeds in innovation of approaches that guarantees the continuity of its mission.
• The accumulated resources at personal levels, and knowledge generation and dissemination as well as the sustainability, the center became a figure in the national civil society realm and being connected regionally and globally.

The Agenda 2030 offers civil society a new framework which creates an important framework which helps civil society to hold governments and the private sector to account.
Education in Sudan is not considered as a basic right. It is considered an investment and the more families should pay to the education and the future of their children. Numbers of youth were forced to give up on their future and leave their studies, specially university’s students were forced to leave universities for financial causes even before they receive their degree.
As part of the GCAP strategic plan, fighting inequality and poverty is the thematic focus of the coalition’s work. In practice this means fighting poverty among youth and university students to end inequality to access to quality education and help them having decent work and income.

Women and children are caught in a web of socioeconomic and political vulnerabilities including poor access to basic services, especially education, health and sufficient safe drinking water. The highest rates of illiteracy in the country are found among women reaching about 70% in some states such as Western Darfur.

But Sudanese women engagement in political, social activities has a long history with ups and downs. In post-secession Sudan, women need to reflect on their past experience and dig-in their institutional memory (golden days of 1950s up to 1970s) to draw lesson and strategize for building and re-building new categories of leadership: leadership that target women interests imbued with feminist discourse.

Other important vulnerabilities include:

An overwhelming poverty situation reinforced by lack of pro-poor policies, economic liberalization and meager spending on social services and social capital development. This has created women as the main victims of HIV/AIDS and other endemics such as TB.
Patriarchal social structure leans heavily against women endorsed by conservative traditions and interpretations of religious texts, i.e Fundamentalist Islam
Gender-based violence, in all of its forms, including domestic violence, is recognized as widespread practice in Sudan. The horrible stories of women raping documented in Darfur are globally known.
Lack of access to resources and control over them, such as land, camels and cattle, access to credit etc.
Prevalence of discriminatory laws and Acts that cripple the status of women and hinder their freedom and mobility. Examples of such laws include the Labour Law, Nationality Law, Criminal Act Law, the Law of Public Order and Personal Status Law. Customary Laws, amongst others’. Customary law is also repressive to women by restricting their representation in customary institutions and by definition their role in public life.

A broad-based civil society engagement is needed for more than ever before for doing research, building awareness, doing advocacy and monitoring the implementation. This could be termed as ‘Sudan SDGs Watch’ to be led and steered by a Gender Task Force (Sudan).

3 reports on SDGs from the projects that we have executed with partners which are KLP “ Together for Development”, Gender forum and Shift project. The role of the coalition vary from project to another KLP was aimed to orientation of decision makers to include SDGs in their policies
The private sector is suffering from unstable economic policies made by government and we find government companies working in profit and services sectors, however government adopting privatization policies, also private sector suffering from declining of Sudanese pound exchange rate per other foreign currencies, thus enforced all who working in this sector to withdrew their moneys from the sector of production activities and then investing in the sector real estate. So, the private sector should be included and mobilized to be part with any process.

In general, civil society’s effort has not been praised enough in developmental processing, either from donors, government and private sector. There is a lack of legislations and laws are enacted to allow to civil society organizations to get information related to national development policies from governmental agencies, but there is weak in coordination and dialogue between partners.

So far we have built a wide networking in Sudan of national, international NGOs and CBOs, we have cooperated executing projects and developing policies with support from Feridrch Ebert Office in Sudan and UN-Women office in Sudan. We have campaigned on SDGs and created CSOs coalition to hold the government accountable for the international SDGs framework and Sudan has committed itself to prepare an strategic plan with participatory approach. We have 3 reports on SDGs from the projects that we have executed with our partners which are KLP “ Together for Development” , Gender forum and Shift project. The role of our coalition vary from project to another KLP was aimed to orientation of decision makers to include SDGs in their policies . Gender Forum is aimed to raise awareness about SDG generally and Goal 5 in particularly.